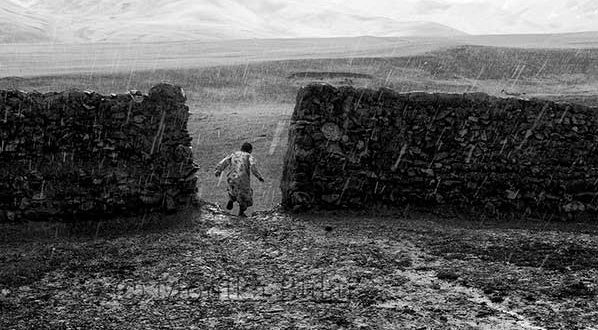 Photo exhibition by Monika Bulaj.
A solitary journey in the Afghans’ land. Sharing sleep, efforts, hunger, cold, fear, whispers, laugh, prayers. I traveled alone, by bus, taxi, horses, trucks, on yak-back, from the Iranian to the Chinese border, on the Wakhan snows, armed with a notebook and a Leica. Balkh, Panjshir, Samanghan, Herat, Kabul, Jalalabad, Badakshan, Pamir Khord, Khost wa Firing: weaving all the time in order to avoid the bandits, and following the complex security geography that all Afghans know very  well. When speaking to Afghans, I discovered that war is a multi-million self-fuelling  machine, that just to keep working goes as far as paying in a roundabout way bribes to its own enemies. From the time when I refused to travel “embedded” in a military unit – wearing a Kevlar helmet – I re-discovered the world that Europeans, from Maillart to Bouvier, loved a lot, that same world that after ten years of military presence, we have given up to know. The Sufis cradle. The tolerant Islam s cradle. The cradle that the West  likes to ignore, as much as Bosnia. A land of poets that Talibans hate, and  our bipolar crash scheme threats. A naked and mineral country, where a tree has an unrivalled majesty, where each person has no room for arrogance. Deserts where the call “God is great” sounds much purer than anywhere else. A dazzling land with endless skies, so flooded with sun to the point that in order to give new meaning to light, fire, and shining looks it is necessary to seek shelter in the shade. Inside, at sunrise, at sunset. A desperate country where women are crushed by tribalism and opium is the only medicine of the poor, but where a foreign woman may be welcomed in a mosque and where the stranger’s enchantment is considered as a blessing.  In this country one risks his/her own life just by going to school and  in the outskirts children wake up at four a.m. to go get some water on donkeys’ back. Yet,  in this country there is irony, and people laugh even in their  darkest moments, have affection and show respect to the eldest, are conscious that their only chance for a future life is in schools and in their children, the men of tomorrow. In the bright garden of Afghanistan I have followed by instinct its paths, and found embers of hope in the most un-hoped for places, at the darkest bottom of desperation.