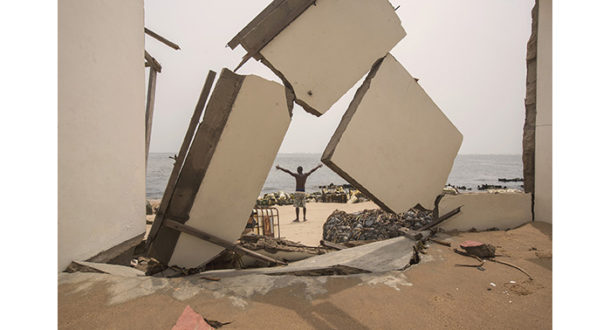 Shot along the coastline of Ghana, Togo and Benin, “Ocean Rage” documents the devastating natural and social effects climate change is having on the coastal communities of West Africa.

As a direct consequence of global warming and sea level rise, more than 7,000 kms of coastline from Mauritania to Cameroon are eroding at a pace of up to 36 metres per year, disrupting the lives of tens of millions of people. While local governments scramble to salvage big cities and industrial complexes, thousands of villages are being left out in the cold, pushing a thousands-year-old way of life to the brink of extinction.

Once home to thriving fishing settlements, the coastline of Ghana and Togo is now a sequence of crumbling buildings and ghost towns which have been swallowed by the Atlantic Ocean in little more than 20 years. As climate change wipes away houses, shrines and plantations, it also destroys the livelihoods, identity and social fabric of entire communities, with dangerous consequences for the future of the whole continent. Far from being an isolated issue, the problems haunting West Africa are the harbinger of what mankind will experience if we won’t be able to find a viable balance between progress and environmental conservation.

In a world where welfare is synonymous with urbanization and consumerism, nature and the lives of traditional communities are constantly being sacrificed on the altar of modernity. Solving this apparently impossible conundrum requires a complete overhaul of our priorities. The lunar landscapes depicted by “Ocean Rage” are not lost forever. They are the result of choices we can reverse.