Portfolio review with Britta and Keith 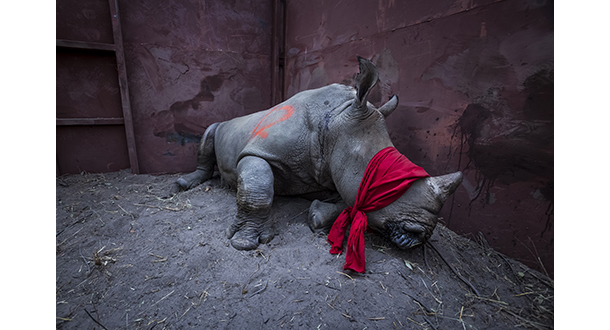 Blindfolded and partially drugged, a young white rhino (Ceratotherium simum) waits in a boma after a long journey from South Africa. The rhino will be kept in this boma and reunited with its mother before being released into the wild in Botswana as part of efforts to rebuild Botswana's lost rhino populations.

Art is expression – and powerful expression can effect change. Photography in particular has this power. Indeed, without some of the photographs in this project, many wildlife crime stories would not have been given exposure. Most people never forget a truly powerful picture, whether they are transfixed by a shocking moment of raw reality or drawn in by a tender, compassionate composition.
The photographers who have contributed their thought-provoking images for this project have different styles and skills. Some set out to highlight injustice through statement art, creating images that are unforgettable through their power – fury expressed beautifully. Others take dismembered beauty and reincarnate it in a haunting arrangement, turning evidence into art. Or they use the iconography of classical art to give their compositions human resonance, echoing a crucifixion, a deathbed repose or the spoils of war.
The photojournalists among them have set out to cover international wildlife crime through a visual narrative, much as a war journalist would, with a series of emotionally powerful images, each skillfully shot and planned, each encapsulating a different angle of the story.
Then there are the passionate wildlife photographers who begin by covering one story about the life of their subject and find themselves witness to another story and their photographs testimonies to crimes or injustices.
The intention of yet other wildlife photographers is purely to convey the empathy they have with their subjects and move us to care in the same way – so that we feel real motivating anger that anything cruel could be done to such sentient creatures.
To execute images of this quality, to shoot pictures that are more than chance records and that will remain powerful however many times they are looked at, takes knowledge, skill and artistry. And that usually comes from years in the field and the acquisition of visual literacy. These images take both time to achieve and an artist’s eye. They are stand-out pictures of true value. Not surprisingly, many of them have won major awards.
All the pictures involve people in some way. They may not record crimes in a strictly legal sense, but they reveal cruelty and ignorance or wildlife-extinction tragedies that, in the long run, are likely to affect our own wellbeing. As a contrast to the scenes of cruel indifference, many portray the tender moments of human care. But all make a connection with us. They engage our compassion and prompt us to speak out against inaction or political denial. That’s the power of photography. And by creating a gallery in this project, the photographers’ aim is to magnify that power through the cry “Photographers Against Wildlife Crime!”