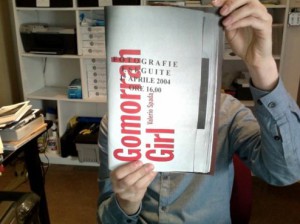 With Kasia Korczak and Payam Sharifi he founded and was Editor in Chief of “Cross Magazine”, which was distributed in more than 40 countries worldwide.

In 2011 ‘Gomorrah Girl’ book is released.
‘Gomorrah Girl’ is published by Cross Editions in 500 copies and sold-out as well as special edition, 30 of 500 copies that constitute this first edition, are numbered and signed by the photographer and come with a signed photoprint.

‘Gomorrah Girl’ second edition, with a quad fold poster designed by Valerio Spada comes in bigger format and in 750 numbered copies and is now available for sale on this website.