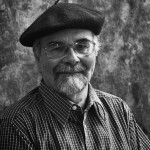 Walo Thönen was born in 1950 und grew up in Schaffhausen (Switzerland). Now living in the South of Switzerland.

In 1966 he buys his first SLR-camera and begins his apprenticeship as an optician in Stein am Rhein. Four years later starts his travelling years and further education. Places of residence: Geneva, Lugano, Stockholm, St.Gallen, Olten and Pazzallo.

In 1979 after his examination for the title of master of optics he goes back to Lugano. After car crash in 1982, abandones his job. Everything changed…
In 1984 starts visiting workshops In Switzerland, Italy, Germany, Austria, France, Hungary, Spain and Czech Rep.
In 1986 he opens his own photostudio in Caslano.

After partecipation in various competitions around the world. first prices in Switzerland, Germany, Austria, France, Great Britain USA with a lot of publications in magazines and books. Several exhibitions in Switzerland, Germany, France and Czech. Rep., Taiwan.
He won the Photographer of the year at PhotoSuisse in 1999. Several times winning the Color- and B/W-sections.
Teaching in nude-seminaries in Ibiza, Lanzarote, (Spain), Germany, Czech.Rep. and Switzerland