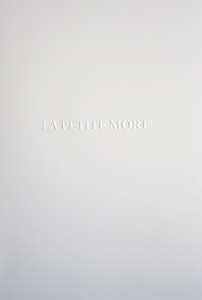 What pornography is really about, ultimately, isn’t sex but death.

Like a voyeur, a spectator in front of my monitor as a stage, I looked through my camera, operating in the meantime my kind of decontextualization from the pornographic language in which everything is extremely well focused, vulgarised and objectified with the aim to excite the genitals. So the porn dimension is the source from which “La petite mort” is born, but my interpretative gesture of “appropriation” of video images, in re-writing them in another horizon, has not sacrificed the couple Eros – Thanatos, while pornography, as a totalizing language, ends up killing one of the two.
I wanted to recreate a content from a stream of images, letting those frames hidden in a temporal flow to broaden in their becomingness so that death is found in new images, photographs, in which time and space become abstract
My interest was in writing a visual poem, poetic and intimistic, on the flesh,
on loneliness and fragility of bodies nudes and absent, isolated and dematerialized by the pixels and the distance of a monitor screen.

La petite mort, “the little death”, is a French metaphor for referring to the spiritual release that comes with orgasm or to a short period of melancholy or transcendence as a result of the expenditure of the “life force”, the feeling which is caused by the release of oxytocin in the brain after the occurrence of orgasm. Literary critic Roland Barthes spoke of la petite mort as the chief objective of reading literature. He metaphorically used the concept to describe the feeling one should get when experiencing any great literature.

The project has become a photo book, selfpublished in april 2013, in a limited edition of 100 copies.