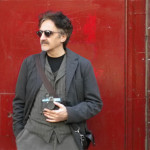 Reza Khatir was born in July 1951 in Tehran. In 1968 he moved to England to continue his studies, in 1976 he interrupted his studies of food science at the Polytechnic to devote himself entirely to photography. In 1977, after a stay in Paris, he moved to Locarno and then attended a photography school in Milan. He began his professional career as a photojournalist working on various assignments in the Middle East for major agencies and magazines. After many trips, which offered him valuable experience, in 1981 he founded his own photographic agency (Skylite) in Locarno. In 1986, launches with a friend FLAIM magazine, published in Switzerland and subsequently participates as a publisher at the publication of the magazine “CHIAROSCURO” in Milan. In 1988 he founded a small publishing house through which publishes several books of art and photography. Between 1981 and 1992 he worked exclusively with Polaroid film in all formats, and very often with the giant Polaroid 20×24 “(50x60cm).

From 1979 until now has been conducting personal research often linked to memory, has exhibited in galleries and museums around the world, among which, the National Museum for Photography Bradford. Musée D’Art et Histoire,Fribourg. Canon Photo Gallery, Amsterdam. UNO (Unesco), New York. Scotish Counsil, Edinburgh. Museo De Arte Contemporanea, Caracas. Galerie Nikon, Zürich. Galleria Il Diaframma, Milano. Musée des Beaux-Arts, La Chaux-de-Fonds. Kunstmuseum, Olten. Museo Cantonale d’Arte, Lugano. Museo Biasca, Biasca. Munich Stadtmuseum, Munich. Museo de Arte Contemporanea, Madrid. Musée de L’Elysée, Lausanne, Victoria and Albert Museum, London. Museum of Modern Art, Mexico City. Hamburger Kunsthalle, Hamburg and Palazzo delle Esposizioni, Rome. He has published his work in numerous magazines, books and catalogs and has won several international photography awards. In 1985 he was selected by a panel of curators and art historians as one of the 12 ” The New Swiss Photographers” for the magazine DU and in 1986 he was invited to participate in the exhibition at Photokina in Köln, that gathered some of the most influential colour photographers worldwide to celebrate the 50th anniversary of colour photography. In 1991 took part in the official exhibition entitled “Voir La Suisse Autremant” to celebrate the 700th anniversary of Confederation Helvetica. He has also been selected for 3 of the 5 Polaroid volumes “Selections” Polaroid International Collection. In 2001 the work of Reza Khatir was published in the volume Photography 7th Edition, published by Pearson Education, Prentice Hall.

Currently, in addition to his work as a freelance photographer, he is the Photo-Editor for the Swiss weekly “ticinosette” and  he is a professor of photography and visual communication at SUPSI (University of Applied Sciences and Arts of Southern Switzerland).